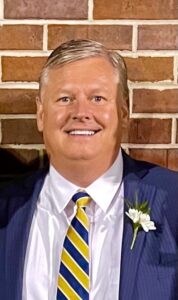 Tuscaloosa, AL – December 14, 2021 – Alabama ONE Credit Union announced today that Bill Rickman has joined the credit union as the Director of AREA Strategy for Alabama ONE and one of its divisions, the Alabama Rural Electric Credit Union (ARECU). His role will involve developing the rural markets in and around the 23 electrical cooperatives under the umbrella of Alabama ONE and working to determine ways Alabama ONE can expand its footprint throughout the state of Alabama.

Originally from Aliceville, AL, Bill was employed by West Alabama Bank for the last 20 years, serving as city president and vice president in Fayette, AL for the past 12 years. He began as an assistant vice president and loan officer in 2001. From 2007 to 2009, Bill served as city president of the bank’s Butler Branch. Prior to joining the bank, he taught at Pickens Academy from 1996 to 2001. Bill was also the head coach for boys basketball at Pickens Academy from 1996 to 2006. During this time his teams compiled a record of 189-77 and reached the AISA Final Four six times.

“The electrical cooperatives, their employees, and their members are key partners with Alabama ONE in supporting rural Alabama’s lifestyles and economies,” said Whitney Oswalt, CFO of Alabama ONE. “Through his experience as a teacher, coach, and community banker, Bill has a deep understanding of the importance and demands of serving the financial needs of small communities. We are excited to have Bill join the Alabama ONE family and further our mission to serve rural Alabama.”

Bill is heavily involved in serving the community of Fayette. He currently serves as a member of the Fayette Industrial Development Board, the Fayette Medical Center Hospital Board of Directors and Gideons International. He also serves as a deacon at Southside Baptist Church, a member of the church’s personnel committee and the Fayette County High School Baseball Booster Treasurer.

Bill Rickman has been married to Mitzi Lancaster Rickman for 30 years. They have four children: Brent (Lucy), 26; Brandon (Makenna), 23; Allie, 16 and Jake, 13. Bill graduated in 1993 from the University of West Alabama with a B.S. in Secondary Education.