“Mr. Mahoney was passionate about community, education and investing in our youth,” said Mark Littleton, President and CEO. “Claire and Kevin exemplify the spirit of the Ronald J. Mahoney Kinetic scholarship through their academic achievements and work in the community.

They are the next generation of leaders, and we wish them the best of luck as they take this next important step in their lives.”

Each recipient received a scholarship for $2,500.  The winners were chosen for demonstrating their commitment to excellence and service in academic studies and community involvement.

The scholarships are named in honor of former Kinetic Chairman Ron Mahoney, who died in January 2016. Mr. Mahoney served on the Board of Directors for 18 years and was Chairman from 2007 – 2016. 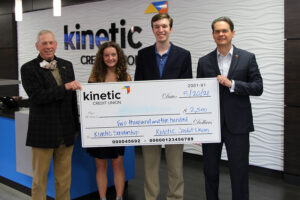