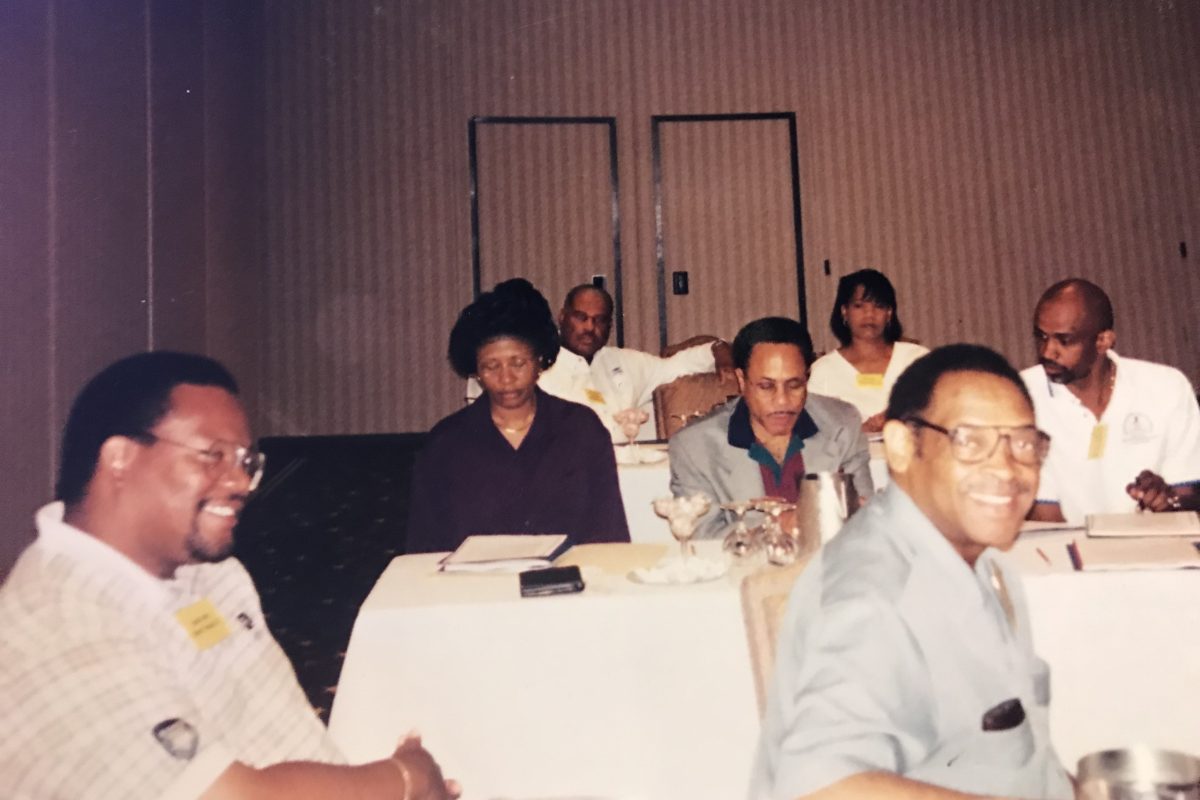 This article was written by Sara Watkins for GCUA.

Every inspired idea has to start somewhere. For the African-American Credit Union Coalition (AACUC), it started with a simple conversation among a group of Georgia credit union professionals who shared a desire to get to know other African American professionals in their industry.

“In our mind, it was the Georgia-based credit union leaders who were the catalyst for conceiving AACUC,” said Renée Sattiewhite, Executive Director of Atlanta-based AACUC.

Over the last 20 years, from Georgia to the rest of the country, AACUC has more than lived up to its mission to increase diversity in the credit union movement. Its support of credit unions and the African Americans who work in them has made the organization a relevant and valued part of the credit union story.

Establishment and Networking in the Early Years

During the Credit Union National Association’s (CUNA) annual Governmental Affairs Conference (GAC) in the early 1990s, several Georgia credit union leaders began talking about the need to identify and network with other African Americans in the industry from around the country. In 1994, entirely through word-of-mouth, GAC attendees were invited to an informal meeting at the popular Hogate’s Seafood Restaurant in Washington, D.C. It was set up as a meet-and-greet of sorts, but it was also a way to compile information. It was understood among the group that African American professionals were already providing influence and leadership within the credit union movement; they were just relatively unknown at that point.

The following year, on Feb. 27, 1995, the group came together once again at Hogate’s during the GAC to formalize the African-American Credit Union Coalition, a name suggested by Sheilah Montgomery (retired President/CEO of Credit Union of Atlanta). The name was voted on and adopted unanimously by the 25 founding members. Montgomery was elected President, with Byron Taylor as Vice President and Shirley Jenkins as Secretary/Treasurer.

Today, 23 years later, goals and objectives of the AACUC are ever-changing, but its commitment to its mission to increase diversity within the credit union community through professional development and advocacy remains the core tenet of the organization. Membership has topped 400 members and 150 credit unions in 32 states and two additional countries.

“AACUC has been dedicated to the development of leadership within the credit union space,” said Mike Mercer, President/CEO of Georgia Credit Union Affiliates. “Credit unions are cooperatives and, as such, are propelled by purpose-driven leaders. AACUC has made a serious contribution to that end.”

Growth through Influence, Awareness and Advocacy

Michael Hale (left) poses with Sheila Montgomery and Hubert Hoosman. All three were credit union professionals who played a major role in the success of the African-American Credit Union Coalition. (Photo: AACUC)

The AACUC has been through two distinct phases: First, a period of networking, followed by a much more action-oriented phase, with a focus on influence, awareness and advocacy.

“We networked and we had a good group of people really excited,” explained Montgomery, who continues to serve on AACUC’s Board. “So, we changed direction and decided we can’t just be network-focused anymore, where people come to meet and break bread and talk about what we’re going to do with our companies. We have to be more than that.”

In 1999, as AACUC started to become more involved and intentional, the group members began attending different meetings and collaborating with different associations. At the invitation of Michael Hale (former President/CEO of Andrews Air Force Base Credit Union), and the encouragement of Pete Crear (retired President/CEO of The World Council of Credit Unions, Inc.), AACUC planned a meeting which served as the paradigm shift from networking to strategic purpose. From there, Hubert H. Hoosman, Jr. (retired President/CEO of Vantage Credit Union) volunteered to host the first AACUC Annual Meeting in St. Louis, MO. Included in the strategic planning session was a restructuring of AACUC in which the first Board of Directors was established. The Board included: Michael Hale, Board Chair; Hubert H. Hoosman, Jr., Vice Chair; Sheilah Montgomery, Secretary; Isaac Dickson, Treasurer.

Part of the new plan was for AACUC to offer assistance to – and become more of an advocate for – small credit unions and underserved communities. The goal was also to spread awareness and enlighten others to see the credit union system as the diverse movement it is.

AACUC created programs people could easily identify with, including an African American Credit Union Hall of Fame, which serves as a record of past and present achievements. And in 2002, a Lifetime Achievement Award was established to recognize African Americans who have contributed significantly to the credit union movement. In 2003, the award was renamed the Pete Crear Lifetime Achievement Award.

“To have your named attached to an award leaves you speechless, flattered and humbled,” Crear said. “But it also leaves you prou

d to know that what you did in your career touched others. Clearly, credit unions are my passion, and if I am to have a legacy, it is the Pete Crear Lifetime Achievement Award.”

AACUC developed the Reaching Toward the Future Internship Program to encourage African American students to seek employment in the credit union field while promoting awareness of the benefits of working in a diverse credit union environment. The internship program offers opportunities for African American students who attend colleges and universities and are majoring in business, finance, accounting, marketing or computer science. Georgia Credit Union Affiliates was among the first to partner and place interns in Georgia credit unions.

“Coca-Cola Credit Union has been a strong supporter over the years,” said Dawn White, former Vice President of Coca-Cola Credit Union. “We participated in the internship program and I was able to volunteer as AACUC Marketing Chair. Networking opportunities provided me with valuable information and people who impacted my involvement with AACUC and the Internship Program. Mentoring and guiding over seven interns for 17 years has been my most rewarding experience with AACUC. Many of the interns became employees of our credit union or have kept in touch over the years; sharing their stories of growth and success.”

What’s on the Horizon

A third phase of AACUC is taking shape in 2018; a transformational change with a more streamlined focus on professional development and mentorship through groups like Young Professionals, the future leaders of the organization, as well as placing more emphasis on continuing collaborations and spreading the word about diversity in credit unions.

AACUC will expand upon professional development at its annual meeting, which is scheduled for August in Atlanta. During the conference, the group will also host a Financial Reality Fair for the seventh consecutive year. With volunteer support, between 80 and 100 students participate in the fair, which is an outreach opportunity geared toward teaching financial basics and introducing credit unions to kids in the community.

Continuing to collaborate is important for spreading the word about diversity and gaining recognition as a trusted entity. Partnerships with key stakeholders in the credit union movement – such as CUNA and the National Federation of Community Development Credit Unions (Federation) – are invaluable for the AACUC’s success in helping expand opportunity, diversity and inclusiveness. Through name alone, AACUC has gained much recognition and aspires to be the go-to for African Americans within credit unions. Montgomery admits, though, that “no man is an island, so we want to continue to be more collaborative, to be a part of that whole skyscraper of organizations.”

“I have a dream team Board of Directors and I love our members,” Sattiewhite said. “We are a very inclusive organization; CUNA Mutual Group, NAFCU, the Federation, CUNA, World Council of Credit Unions… All of those organizations are members of AACUC. And that speaks to how everyone wants to have better diversity within their organization.”

AACUC has also partnered with credit unions in South Africa, an endeavor it plans to continue and hopefully expand. Through its collaboration with the Federation, AACUC supports several Caribbean credit unions, as well. The group’s next step is to figure out how to best offer aid in Puerto Rico after the recent hurricane devastation, as AACUC was instrumental in helping both credit unions and individuals in the U.S. after hurricanes Katrina and Harvey.

In recognition of Black History Month, AACUC has joined forces with the Federation on a social media campaign illustrating the impact of credit unions on their members and communities. Impact stories have been shared all month across Twitter, Facebook, LinkedIn and Instagram and were designed to increase the visibility of African American credit unions within the industry, communities of color, the community development finance sector and legislator

“Black History Month is a reminder to us all that we should celebrate the contributions of a diverse community,” said Maurice Smith, President/CEO of Local Government Federal Credit Union. “So it is with the Credit Union Movement. AACUC supports the belief that credit unions are stronger when all voices are engaged in the conversation. Diversity transforms a commodity service into a competitive advantage.”

AACUC has certainly gone above and beyond in its quest to spread diversity awareness through the credit union industry. What started as a simple discussion more than two decades ago between a few inquisitive credit union leaders from Georgia has grown into a force of an organization that exemplifies the “helping people afford life” philosophy.

“I think it is fair that the AACUC is recognized for its work in professional development,” Crear said. “I think the association has its strongest and most lasting impact in its intern program and the scholarships it provides. Together these make a loud statement on behalf of African American credit union professionals and volunteers.”

When asked what she would like people to know about AACUC, Sheliah Montgomery, proud founding member, board member, credit union professional and African American woman said:

“This is an organization that really does not mind doing the one-on-one. It doesn’t matter what size the credit union is, it doesn’t matter the stature of the CEO; if one of our credit unions needs help, we’re just a phone call away and we will do what we need to do to help that credit union succeed. One of our top goals is to find a way to make sure that those that can succeed will succeed with our resources and partnerships, whether it be personnel or financial. It’s not about the size of our organization, it’s about the impact.”

And the AACUC continues to make a significant impact.

On Saturday, March 27, kids showed up at school but not because they had to—they were a buzz with their...