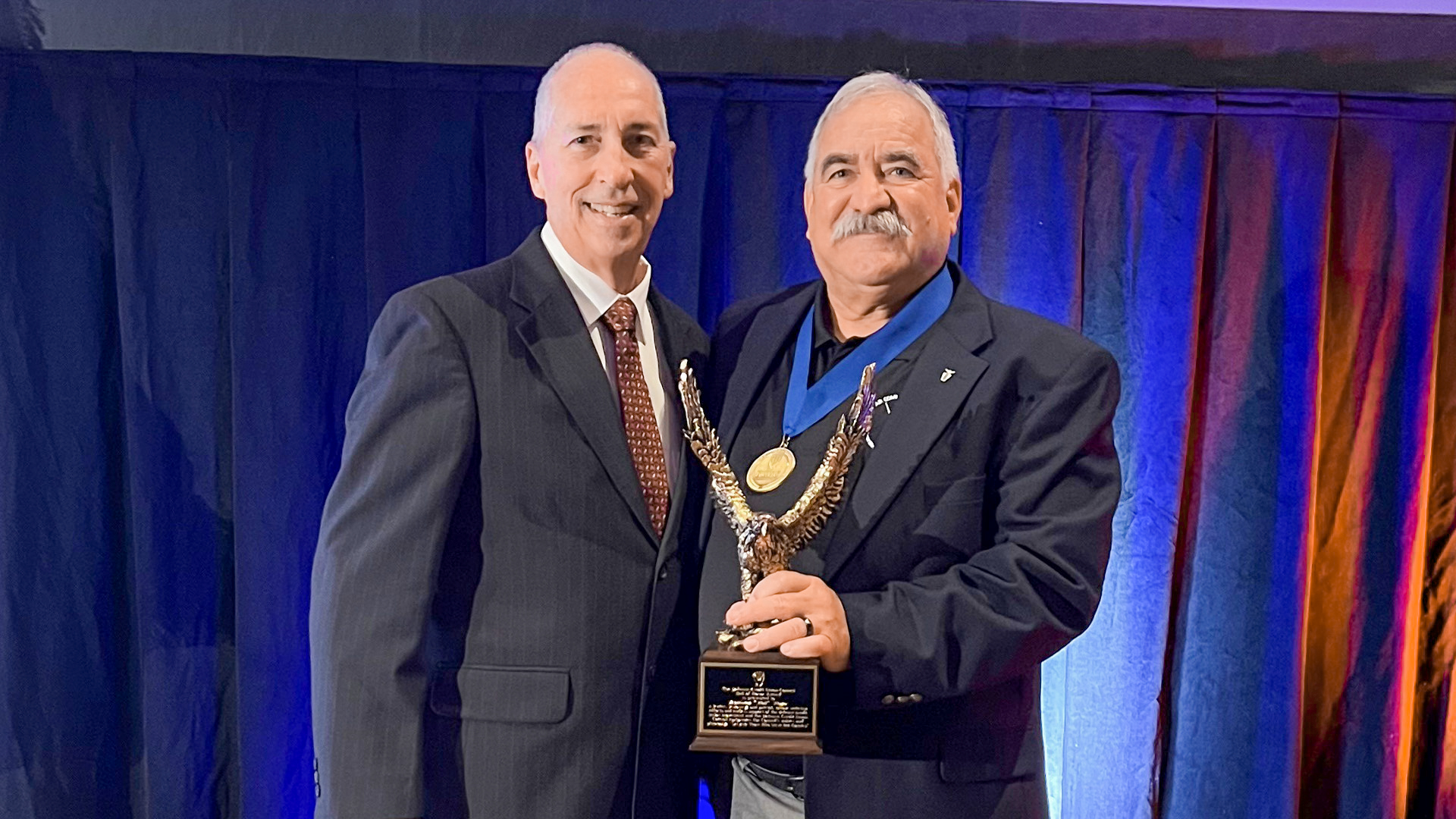 Fort Walton Beach, Fla. (Aug. 9, 2022) – Eglin Federal Credit Union’s Chairman of the Board of Directors William “Bill” Rone was inducted into the Defense Credit Union Council’s Hall of Honor at their annual conference held in San Antonio, Texas on Aug. 4, 2022. The Defense Credit Union is a trade association representing more than 180 nonprofit defense credit unions with over 30 million members and $400 billion in assets. Bill is one of three honorees who were selected from a very competitive field of nominees by the Hall of Honor Selection Committee. They were selected for their impressive history of service and dedication to their military and veteran communities and are part of a history of excellence that exemplifies what it means to be a defense credit union. Read the DCUC announcement here and the conference wrap-up here.

William “Bill” Rone has served on the Eglin FCU Board of Directors for 38 years using his experience of over 42 years in DOD federal service to improve the lives of members. Bill advanced from a GS-04 civilian cooperative education trainee on Eglin AFB to a member of the DOD Senior Executive Service as Senior Civilian and Comptroller for Air Force Special Operations Command. He was recognized with Presidential Meritorious Rank the first year he was eligible for the honor. His career took him to Washington DC for a one-year senior military school, four years on Robin AFB and two years with Naval Aviation Depot in Pensacola.

An expert in all areas of financial management with base credit union and bank liaison experience, he served and supported hundreds of thousands of active-duty, reserve, Air National Guard, and civilian professionals throughout his career. Rone has attended many DCUC conferences, including in an official capacity where he presented the Air Force Credit Union of the Year Award and led the Air Force breakout sessions. He has also served as both President and Vice President of chapters of the American Society of Military Comptrollers and is a lifetime member. Bill is a member of the University of West Florida Foundation Board of Directors and a Director Emeritus of the Special Operations Warrior Foundation where he served over a decade as Treasurer. He is also the Executive Financial Advisor for the Air Commando Association and a Trustee for their Foundation. As a member of the Santa Rosa Creek Indian tribe he volunteers as Financial Advisor to the Tribal Council and Chief.

“I’d like to thank Bill for the 38 years he has served on our Board, including eight years as Chairman and seven years as Vice Chairman,” said EFCU CEO and President Jerry Williams. “We appreciate his commitment to our local community and our Credit Union. Bill’s laser focus on meeting the needs of the Air Force to accomplish the mission, and developing people in his ‘day job’ was equaled by his dedication to the credit union movement. He is always ready to lead or assist as needed, making him a perfect fit for the DCUC Hall of Honor Award.”

The DCUC Hall of Honor was established in 2000 as a means of recognizing those individuals whose exceptional contributions over the years have made a significant difference to DCUC and the defense credit union community. This prestigious award highlights the outstanding accomplishments of leaders, volunteers, management, and staff alike, whose efforts and endless support of the credit union movement and DCUC epitomize the Council’s values and philosophy of “Serving Those Who Serve Our Country.”

“These three honorees represent what the DCUC is all about, serving our military and veteran communities and providing extraordinary financial services that help them build their financial wellness. I’m in awe of their great leadership and am proud to honor their accomplishments,” said Anthony Hernandez, DCUC President/CEO.

Eglin Federal Credit Union was chartered in 1954 and is a not-for-profit, member-owned financial institution, federally regulated by the National Credit Union Administration. Membership includes military and civilian personnel on Eglin Air Force Base, Hurlburt Field and Duke Field as well as affiliates of Select Employee Groups in Okaloosa, Santa Rosa and Walton counties. In addition to military and SEG affiliations, our membership also includes anyone living or working within our Geographic Field of Membership. Our Mission is to provide our members with five-star service, support and solutions to simplify their financial lives.

Where Members Matter Most.